User Mission 1 is a standalone Instant Action map released as part of the Instant Action Demo. The map has no official name; the name commonly given to it is derived from its technical name usrmsn01.

User Mission 1 is set during the initial sweep of the Uranian system, some time before the finale of Stars and Stripes.[1] The NSDF forces there have found themselves under attack from the CCA and are down to their last Recycler; the resulting battle ultimately decided which faction gained control of the Achillean surface.[2] After successfully pushing the Soviet forces into a retreat, the NSDF force is able to move on to the next moon in the system.[1]

You will need to deploy your Recycler the moment you start, then head immediately north; an assault force comprised of four Flankers, two Czars and a Grendel is already on the way. Once you've built your initial Scavengers all you have the time or resources to construct before they arrive is a pair of Badgers, so you're better off providing the bulk of the defense yourself.

Once this initial force has been fought off the enemy response will be slowed for a while. Use the scrap the assault has given you to construct a few more Badgers and, eventually, a Factory; you'll need a few tougher offensive units to help you going forward. As soon as you are able, get a few Gun Towers up as well, as the next major attack wave will include a pair of Golems. Bombers are a good place to start, as you'll need them later in attacking the base.

Before you push towards the CCA base in the north you will first need to clear the eastern path; while the only enemy forces therein is a pair of Paks you can't afford to allow the enemy the chance to flank you. The southern end is easier to block, as the northern one backs straight onto the entrance to the CCA base. Once you've barricaded the flank, you can assault the base.

The entrance is guarded by a pair of Gun Towers, against which your Bombers will come in useful. Within you will find several patrolling Golems, which you should take care in dealing with, and five additional Gun Towers that will need to be destroyed before you can really cause any lasting damage to the Factory or Recycler. Make sure to mop up any CCA forces you encounter as you go; you won't have completed the mission until they are all eradicated, and chasing them around the map afterwards is inefficient and could put your Recycler and Factory at risk. 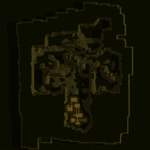 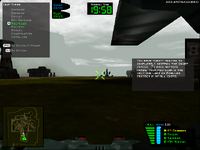 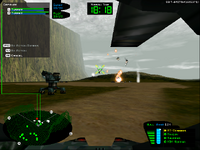 The first wave of attackers being fought off 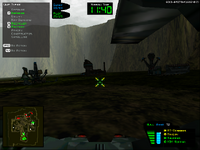 An outpost at the eastern geysers 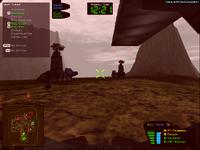 Retrieved from "https://battlezone.fandom.com/wiki/User_Mission_1?oldid=17124"
Community content is available under CC-BY-SA unless otherwise noted.