"Commander, this is the most important mission you will ever face."
- General Collins

The Relic Discovered is the third mission of Stars and Stripes and the first to take place on Mars. It portrays the NSDF's discovery of the Mars Relic, the first of three Cthonian relics.

The Relic Discovered takes place in Mars' Cydonia region, the layout of which is often cited as evidence of alien life on the planet. The "Face of Mars" appears at the north-easterm corner of the map, and an area of Cthonian ruins are visible to the south-west. It is here that the Mars Relic can be found.

The NSDF arrive on Mars to discover that the CCA already have a strong presence on the planet's surface. Unsure of how the CCA could have known their intentions to flee there, a formal investigation is begun.

With the NSDF's forces severely weakened, Bates is deployed to the surface to establish and fortify a base. The CCA, having built a base and started to fan out to other strategic locations, is already entrenched and on the lookout for Bates' forces; Collins advises him to avoid launching a direct assault.

After choosing between three possible geyser sites and deploying the Recycler and Mobile Unit Factory, the Bates and his forces are soon discovered by the CCA. Having fought off the patrol that discovered them, Corporal Buzz alerts him to the presence of an attack squadron gathering to the south-west. Fearing the CCA may be preparing to flank their position, Collins orders Bates to investigate.

When Bates arrives in the area he finds the CCA are gathered around a mysterious object, which Collins orders him to retrieve and return to the Recycler. Bates and his forces destroy the squadron and dispatch a Tug to gather the relic, fending off a further three patrols - including one that flanks them -  at the same time.

When the object is returned to the base a further, larger wave of CCA forces launches an attack with a Tractor in an attempt to retrieve it. Once this force is fought off the CCA stand down, allowing the NSDF to land their remaining forces.

The NSDF discovers the captured object to be a data disk containing what they believe to be the complete historical record of the race that created biometal, which they anticipating allowing them to perform much greater feats with the material. They are unable to break much of its encryption, but what they can gather indicates the presence of another set of ruins near a volcano, which NSDF Command wants investigated.

The Nintendo 64 version of this mission operates on a 20-minute timer.

You will begin this mission with a choice of three base sites, each with its own advantages: the north-east is at the far side of an open plain, allowing your defenders to open fire on attacking forces sooner, but is further from the relic site you will be asked to investigate later; the north-west has a greater abundance of scrap biometal; and the south-west is closest to the relic site but has the least amount of scrap, forcing your Scavengers to travel further afield and slowing production.

Once your producers are en-route you may wish to head in the direction of the CCA base in order to dead off the first attack wave, which will spawn thirty seconds into the mission. Avoid the relic site for now; if you get within 600 meters before you are ordered in, the guard there will triple.

If at any time you feel confident you are capable, you may wish to attempt to destroy the CCA Recycler; this will prevent the enemy from launching any attack waves after the first, attempting to capture the relic, and placing mid-field turrets. Collins won't be happy but you won't fail the mission unless the attack fails and you are left unable to defend your base or the relic.

When your Recycler has deployed, your first units should be a pair each of Scavengers and Badgers. Once your Scavengers have gathered enough scrap you can begin buliding Grizzlies, though another two Badgers to defend the Factory and Recycler are advisable. A second attack wave, comprised of a Flanker and a Czar, will appear sixty seconds after the destruction of the first. 74 seconds after their destruction, three Flankers will set out from the CCA Recycler. The fourth attack wave - one Czar and two Flankers - will approach from the north-west, so take care not to make your defenses too one-sided. The fifth and final wave is built by the Recycler thirty seconds after the fourth wave is destroyed. All of these should be dealt with comfortably by a small group of Badgers and Grizzlies.

Four minutes into the mission you will be ordered to investigate a CCA squadron to the south-west. This is a good time to build a Tug; you will need one shortly. Head to the new nav - "Investigate CCA" - and order the Tug to head there once it has been built. You will then have until its arrival to deal with the two patrolling Flankers and have a headstart on retrieving the relic. If your base's defenses aren't quite adequate you can still afford to bulid them up; you have a window of six minutes in which to comply. You'll have just over three-and-a-half minutes from discovering the relic before the CCA builds a Tractor to capture it. Its escorts will attack your Tug if you have it, so be sure to keep an eye out for them. If the CCA does manage to steal the relic, you have until it gets within 60 meters of their Recycler to stop them and steal it back.

Once you have brought the relic to your base and fended off all five attack waves - or destroyed the CCA Recycler - the mission will complete successfully. 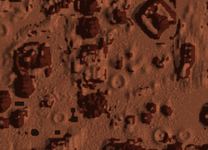 Retrieved from "https://battlezone.fandom.com/wiki/The_Relic_Discovered?oldid=16540"
Community content is available under CC-BY-SA unless otherwise noted.