The subject of this article is only present in Battlezone: Rise of the Black Dogs.

Sniper Training is the second mission of the Battlezone: Rise of the Black Dogs campaign Combat Exercises, and is exclusive to that release. It shows Jason Bates practising with his Sniper Rifle by taking out three Flanker drones.[1]

The area used for sniper training is relatively small, just 400 meters in diameter, and is just under 800 meters south of Eagle's Nest One. The area is used to teach pilots how to use the Sniper Rifle with re-purposed CCA Flankers fitted with remote control systems.

Bates is deployed an area just south of Eagle's Nest One where Corbett instructs him to commandeer an automated Flanker drone approaching from the north using his sniper rifle, which is modified to temporarily allow him unlimited ammunition. Once he has succeeded a second appears behind the first, though this one does not sit stationary like the last and fires Paintball its guns at him, and Bates is ordered to repeat the process.

A third drone appears after the second is neutralized, and this time Corbett limits Bates' rifle to the usual three shots. When he has taken it out too Corbett congratulates him on his shooting, but warns him that the real situation would be much more dangerous.

The first think you need to do is disembark the Grizzly you are provided. Don't shoot the Flanker approaching you yet; the mission will fail if you snipe one of the drones too early. Wait for the instruction, then aim your reticle over the flashing box and fire. Be aware that sniping is much more difficult in Rise of the Black Dogs due to the controller layout. Fortunately, you don't have to worry about your accuracy yet; your ammunition is unlimited.

When you've taken the first drone out a second will appear behind it. Don't worry about moving; this drone is mobile, and will circle-strafe you in attempt to hit you with its paintball guns. Your suit is thick enough to stop them hurting. You still have unlimited ammunition, and must once again refrain from shooting the drone too early. Once ordered, give it the same treatment you gave the first. Move quickly; the mission will fail if you take too long.

After the second Flanker is downed a third will appear from the same place. This time you are warned you only have three shots, so you now have to balance your aim with efficiency as you're still on the clock. If you find yourself down to one round don't gamble it; you can hop back in your Grizzly to refill your ammunition and avoid the mission failure that comes with running out of rounds. Once the final drone has been sniped, the mission completes successfully. 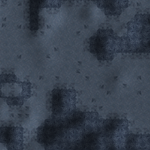 An impression of the shellmap this map would use in the PC version. 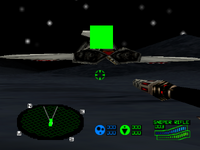 The first drone. Note the green square. You can zoom your rifle now, too. 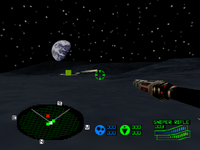 The second drone is mobile and returns fire. 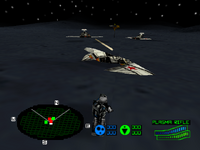 Be wary of the disabled drones. If one of your rounds hits them instead of the target, it will be wasted. 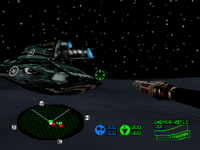 You can restock at your Grizzly if you run low on rounds.
Add a photo to this gallery

Retrieved from "https://battlezone.fandom.com/wiki/Sniper_Training?oldid=17116"
Community content is available under CC-BY-SA unless otherwise noted.