Red Arrival is the first mission of the NSDF campaign Stars and Stripes. It portrays the moment of first contact between the NSDF and CCA.

Red Arrival takes place at Outpost Three, a small base built between the northern edges of a long valley. The ridge to its east makes it a strong defensive position against forces heading north towards Eagle's Nest One, and the valley to the west and south provides a good source of biometal scrap.

Having noticed an unusual amount of rocket activity in the area, NSDF Command deploys Bates to Outpost Three to manage resource gathering and defense. He is warned of the presence of strange radar signatures in the area and ordered to escort the next Scavenger to head into the field.

After a moment's reminescence about the origins of the war he is fighting, Bates orders his Recycler to construct a Scavenger to begin scrap-gathering duties. They have only just left the base when Lieutenant Corbett warns Bates of a group of unidentified vehicles heading in from the south-west. Bates intercepts the first of these as it heads towards his charge and destroys it, and then continues his duties.

As the Scavenger reaches the scrap field it comes under attack from another unidentified vehicle, which Bates also manages to fight off. Corbett warns him that there are more of the units approaching and that he is heavily outnumbered, and orders the Scavenger to retreat to the outpost.

Once the Scavenger is within range of the base's defenses Bates is informed of another Scavenger pilot who is retreating towards the base under pressure from the hostile forces and in need of assistance; Bates rendezvouses with it and takes out its attacker, then escorts it to the base.

Despite the safety of both Scavengers, Bates is warned that the situation is dire; the forces, which have been discovered to be the Soviet CCA, have bypassed his position at Outpost Three and moved directly on Eagle's Nest One. He is redeployed there to take charge of the defense.

An earlier version of Red Arrival was to begin as a training mission, teaching the same content later covered by Bio-metal Scavenging and Attack and Destroy.[1] It has the player escort a Recycler along the eastern ridge from an outpost at the northern end to a base site, where they would use a Razor to destroy the two Training Turrets to the south and then begin to gather biometal with a Scevenger, which would be attacked by Flankers.[2] This interruption of Bates' training would then lead directly into Eagle's Nest 1.[3]

The first thing you'll need to do on launching this mission is choose a vehicle. There are four available to you; a Razor, a Thunderbolt, a Bobcat and a Grizzly. Which you use is down to personal preference; the Razor is faster and more maneuverable but doesn't have as much stopping power as the others, the Thunderbolt can deal incredible amounts of damage but can't move very fast and turns painfully slowly, the Bobcat is armed with the lock-on Hornet but has a more limited amount of ammunition, and the Grizzly is a better all-rounder with dual cannons (and the only vehicle of the four able to wield the Pop Gun. Most players choose the Grizzly due to its versatility and familiarity.

There are two weapon pickups within your base; a Rave Gun near the Headquarters to the north and a Pop Gun by the Hangar. All four vehicles can use the Rave Gun, but only the Grizzly can make use of the Pop Gun. Once you have chosen your vehicle it is recommended that you pick these weapons up, though you can order a wingman to if you prefer.

Build a Scavenger as instructed. You'll notice your Recycler only has enough scrap for one; you'll need to protect it from several Flanker attacks just like you did in Bio-metal Scavenging. It will start scavenging automatically after a while, but you can order it to do so manually (or just order it to head to the nav point) to speed things up a bit if you wish.

The first flanker will appear when your Scavenger reaches within 75 meters of a single piece of scrap between the outpost and the scrap field. Deal with it quickly, because the Scavenger will continue immediately on towards the scrap field; another Flanker will attack it once it gets within 200 meters.[4]

The first pair of Flankers will appear when your Scavenger reaches within 75 meters of the Scrap Field nav point. The first is too far away to attack, and won't engage unless you or your scavenger stray into range.

Two more Flankers will approach from the same direction thirty and seventy-five seconds after the first. Unless you ordered your Scavenger to stick around these are too far away to reach it and will be taken out by the base's Gun Towers, so you need not worry about them.

When your Scavenger reaches within 300 meters of Outpost Three, you'll be given a second to rescue. A third Flanker will appear to attack it ten seconds later, so you'll need to head there straight away. When the Scavenger reaches within 200 meters of the base safely the mission will complete - if the Flankers aren't destroyed yet, the Gun Towers will finish them off.

On easy and above it is possible to grant yourself up to two additional wingmen to fight with you and protect the Scavengers. The first of these can be obtained by destroying the Lander just to the south of Outpost 3; a pilot will occasionally eject from it and head for the nearest empty vehicle (the Grizzly or Bobcat unless you shunt another vehicle closer).

The second wingman can be obtained by ordering the Scavenger to manually gather scrap from sources other than the scrap field. Destroying the lander and one of the four vehicles, or leading the Scavenger to the scrap field without going near the scrap piece between it and the base, will provide enough scrap to built an additional Scavenger whose pilot can be ordered to hop out and change vehicles using the Pick Me Up command. This must be done before sending the Scavenger further out into the field, as it will not drop any gathered scrap off on its return.

You can order one of these wingmen to pick up the Rave Gun if you prefer, though bear in mind that only the player will use it if it is equipped to the Thunderbolt. 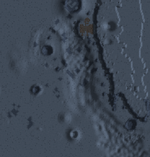 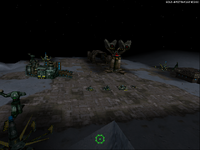 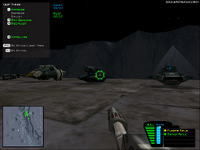 Four vehicles to choose from 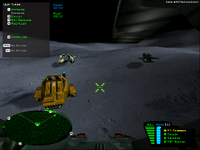 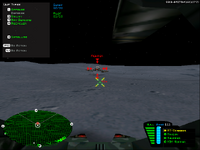 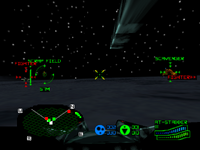 The first two flankers in Battlezone: Rise of the Black Dogs 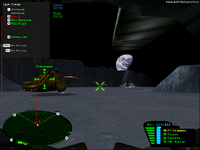 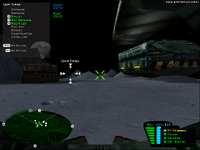 Retrieved from "https://battlezone.fandom.com/wiki/Red_Arrival?oldid=17114"
Community content is available under CC-BY-SA unless otherwise noted.