ISDF15 is a mission cut from Battlezone II. The blank map remains in the game's filesystem, removed after its layout was designed but before any other work could be done.[2]

A Battle Royale underwent significant changes during development, and three of at least six planned missions were cut. The first of these six, ISDF15, was the only one to have entered production at the time and its assets were mistakenly not deleted, leaving A Traitor's Fate to retain its original number. Beyond those two missions the original intended order of the campaign is not known, as Hole in One and Core were only developed later.

Due to the incomplete state of its script nothing can be inferred from it about the mission's gameplay,[3] but as there is only one area of terrain flat and large enough for base construction in the rough center of the map[4] and the map is not large enough to support staging points it seems likely that the player was intended defend an allied base against waves of attackers.

The map's layout consists of a large bowl with a flat area in the center-north and three ridges on its west, south and eastern sides; the latter of these can be ascended using a gentle incline on its eastern edge, presumably to allow access to a biometal pool. A small mere with several outcrops brackets its northern-eastern side, blocking it to tracked vehicles but making it an ideal route of attack for hovercraft.

When the map is loaded, the player spawns on the south edge. As this map was cut before it was finished, this is simply where the designer happened to leave their tank - said vehicle, a Warrior, is not indicative of the player's intended faction. 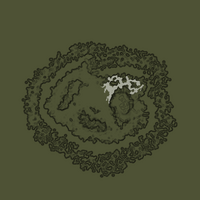 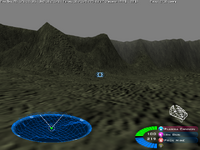 The view from the player's spawnpoint, showing the map's monotextured nature 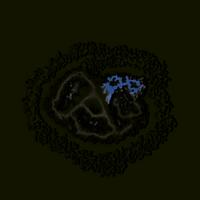 Retrieved from "https://battlezone.fandom.com/wiki/ISDF15?oldid=17130"
Community content is available under CC-BY-SA unless otherwise noted.