Heroical is an Instant Action map created by Bystander and released on June 12th 1998. Three months later it was released as part of Battlezone: Battle Grounds. Along with Max 5 Minutes and The Relic Yard it is one of only three solo, action-oriented missions.

Suspecting the CCA have discovered something of importance in a large-scale open cast mine, the NSDF deploys a small platoon of paratroopers with orders to destroy the Soviet Satellite Tower to break communication lines and head for a nearby outpost hidden in a hard-to-reach section of the mine, then use the vehicles found there to destroy the Russian forces occupying the site. Their commander, meanwhile, is to steal a Scavenger in order to reconnoitre the area before rejoining his men for the assault.

The paratroopers accomplish their first objective easily, but from there the mission goes awry very quickly, and all six are killed by Chaingun fire from unexpected Paks and Flankers before they can escape the crater. The commander successfully steals the scavenger and is able to continue the mission alone, gathering intelligence on the area unnoticed and then using the tanks and weapons found at the outpost to destroy the mine.

Approached with patience and careful strategy, Heroical is actually one of the easiest maps in Battle Grounds.

There is no point in attempting to assist the other paratroopers; they will all die anyway, and by remaining exposed in the crater you leave yourself open to fire from the Cannoneers on the crater rim, the Paks stationed around the sides and the units coming in from the north. Allowing any enemy unit to become aware of your presence will make your attempts to reach the outpost at the other end of the map much, much harder.

If at all possible, you should aim to land directly on the empty Scavenger; you can find this just over a quarter-turn to your right. Once you have done this, you can explore the map with impunity. You can take this opportunity to mark areas of interest around the map with Nav Cameras. There are four of these: a cache of Service Pods in the south-western branch of the mine; a Factory in the first north-eastern branch; and another supply cache, this time with Service Pods, Flash Cannons and a Rave Gun, in the center of the map guarded by Gun Towers. A fourth point of interest, an NSDF supply depot hidden at the end of the second north-western branch and hidden beyond what appears to be an impassable cliffside, is already marked by a nav camera as "American Outpost".

Once you have explored the map to your satisfaction your next objective should be the outpost identified by the "Home Base" nav camera. You can access this by climbing another false cliffside on the south-western side of the north-western end of the mine, beyond a bank of Proximity Mines; it is advisable to drive straight through these, as firing on them will attract unwanted attention. The two cliffsides are easy to traverse using the jump thruster.

Alternatively, the outpost can be reached in a quicker but slightly riskier manner by ejecting towards it from another part of the mine and bunnyhopping across to the base. If done at a poorly-chosen location this may cause significant harm to your Pilot, but in some places a simple jump can be enough to launch you over the lip of the cliff edge.

At the outpost you will find a selection of five tanks - Grizzly, Bobcat, Wolverine, Thunderbolt and Razor - a Supply Launch Facility, a Hangar and a Supply Depot, and two SP-Stabbers. These are best equipped on the Grizzly, which is the best-suited of the five for the job ahead.

The remainder of the mission is where patience and good strategy comes into play; from here to completion you will be performing a series of short hit-and-run attacks on the CCA in the rest of the mine, with regular returns to one of the two outposts in order to restock on armor and ammunition when either is low.

You will want to sweep the mine from the north-west to south-east to ensure you retain easy access to your outposts, but before you start you may find it worthwhile to sweep the rim of the mine for Cannoneers; you will find one of these mid-way down the north-eastern edge of the mine and six more surrounding the dig site where you dropped in. The Bobcat is the best of the five for this job; it carries enough nano-ammo for its AT-Stabbers to destroy all seven, has enough EDD armor plating to survive several direct hits, and is fast enough to do the job relatively quickly. It is fastest to perform the sweep by heading around the drop-zone first, getting up close to all six Howitzers there, and taking the seventh by crossing the high passage between the second supply outpost and the CCA Factory. Once the job is done, you can either eject from there or drive back to the outpost to switch vehicle.

If you wish, you may here choose to use the Thunderbolt to do another series of sweeps around the rim - this time using the range of its Rocket Bombs to destroy the buildings below. You should be careful as you approach the rim in this vehicle, as its weight and slow speed mean it could easily fall over the edge if not properly controlled - adequate use of the jump and reverse thrusters will help to prevent this while you peek over the edge. Be careful if you decide to attack the Gun Towers or Power Generators in the center of the map while doing this lest you destroy the Rave Gun and Flash Cannons there. You may also wish to use these sweeps to damage or destroy the Golems in the mine, though be careful doing so as they tend to stay nearer the cliffs and attempting to hit them may cause you to fall in. Should this occur, the Thunderbolt's manoeuvrability will be insufficient to prevent them from destroying it and you will be forced to walk back to the outpost for another vehicle. The Wolverine is equally suitable for the task if equipped with the Comet Cruise or Rocket Bombs found at the secondary outpost (the site of which can be left by climbing to the high passage at its southern edge).

Whether you choose to perform these extra steps or not, the final job is to clear the mine itself using the Grizzly. The two provided SP-Stabbers are ideal for this task - you can upgrade to another weapon from the Supply Launch Facility if you prefer, but bear in mind that two Flash Cannons and a Rave Gun are available further down the map. The SLF is best saved for providing service pods in the field if you don't want to drive back to the outpost, or for outfitting another vehicle should you lose the Grizzly.

If you destroyed the buildings in an earlier run you will now have a much easier job, as the enemy only has a limited number of units to respond with and you can use the idle Scavengers for cover. If you are unwilling to engage in open combat you can progress forward slightly, then lure the enemies back towards the entrance to your outpost so you can take them out from the safety of the high cliff pass.

When you reach about half-way down the mine you will be rewarded with easy access to the secondary outpost - and the cannon upgrades, if they haven't been destroyed by the splash damage from your weapon fire. Be wary of the three Golems to the south-east of this position, as they tend to stick together and can be difficult to separate.

If you have completed your sweeps through the mine and the mission has still not finished, be sure to check the narrow path to the south of the CCA Factory; the units hidden here are easy to miss. 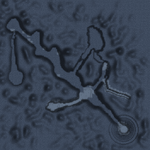 Retrieved from "https://battlezone.fandom.com/wiki/Heroical?oldid=13597"
Community content is available under CC-BY-SA unless otherwise noted.