The dotXSI format (typically referred to simply as XSI, an acronym for X|SoftImage) is one of three model formats usable by Battlezone II's engine. The format is related to the DirectX-based .X format [1], which Battlezone II is also capable of interpreting. When an XSI model (or an X model, though the DirectX format is not fully compatible with the game) is read for the first time, the game munges it to a MSH file for more efficient use.

The models used in Battlezone II were created using Softimage 3D, a 3D modelling program first released in 1988 and famously used to animate the dinosaurs in Jurassic Park. Its parent company Softimage was acquired by Microsoft in 1994 and re-branded Softimge|3D, who in turn sold Softimage to Avid Technology in 1998[2]. Softimage|3D was discontinued in 2002, having been gradually replaced by Softimate|XSI over the preceeding two years.[3] In 2008, Softimage's 3D and animation assets were acquired by Autodesk, and the re-branded Autodesk Softimage package is due to be discontinued in 2015.[4]

Modern versions of the .XSI file format are incompatible with the Battlezone II engine, as the version its models use (dotXSI) was introduced with Softimage|3D 3.8, released on July 20th 1998[5].

XSI models are composed of parts called frames laid out in a hierarchy structure. Each frame can contain several other frames or meshes, the latter of which contain vertex co-ordinates that make up the model structure and reference a material for use as a texture. Several frames with specific names are required in certain types of models, including hardpoints which are used for indicating particular locations on a model for use in-game (such as weapon points and the cockpit).

Despite Softimage|3D having been discontinued, many mod developers have found their own ways of creating and editing XSI files. A few of the tools used are listed below. 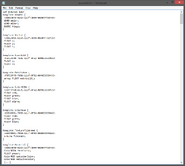 The pre-1.3 Daywrecker, one of the few X models shipped with Battlezone II. 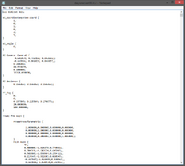 Its 1.3 replacement, a dotXSI model, demonstrates the differences between the formats.

A wireframe of the Sabre's dotXSI, viewed in ThreeD and demonstrating the frame/mesh structure. 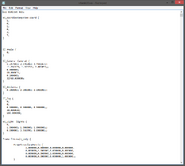 The same file viewed in Notepad.
Add a photo to this gallery

Retrieved from "https://battlezone.fandom.com/wiki/DotXSI?oldid=9738"
Community content is available under CC-BY-SA unless otherwise noted.