Divots is a Deathmatch map that was cut from Battlezone after the Multiplayer Balancing Test. It can be found as a playable map in the 0.8 beta and its assets are still present in the release version of the game. Elements of its design would later resurface in Armageddon, and a repackaged version for Battlezone 98 Redux was included as part of the Lost Maps collection.

Divots is a large map with a relatively low maximum player count and a relatively bland design, both of which are likely to have been major contributing factors to its removal. It is named after the raised turf displaced by a horse's hoof or a sportsman's boot, which may be a reference to the shallow depressions around the center of the map.

As Divots is so large and supports such a small number of players, much of the map's playtime will be spent in search of other players. Given the placement of the ammo and repair pickups combat is most likely to occur in the middle of the map; the presence of a single Repair Kit in the center of the map will provide a natural destination point for fleeing players. The lack of additional weapon crates and scarcity of repair kits, which would normally mean player lives are likely to be relatively short, are offset by the size of the map; the four spawn points are 800 meters from the center of the map and are protected by a high wall. Regardless, players may occasionally be seen fighting at their spawn points when one attempts to launch a surprise attack on another.

The terrain is generally bland and smooth, which is of little advantage to an attacking or defending player, though the depressions that give the map its name can make good hiding places against the unwary player - and at the same time can be cleared relatively easily using mortar fire. It is possible to escape the confines of the surrounding wall relatively easily - the gaps to the north and south-east can be passed even without the use of jump thrusters - but doing so would be considered unfair under most circumstances and will distance the player from the fight to an inconvenient degree. 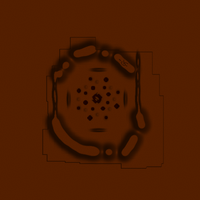 Retrieved from "https://battlezone.fandom.com/wiki/Divots?oldid=17167"
Community content is available under CC-BY-SA unless otherwise noted.