Defensive Command is the second Combat Exercise in Battlezone. It is known as Defensive Combat, and is the third exercise, in Battlezone: Rise of the Black Dogs. It introduces Jason Bates to using the Command Interface to interact with units on the battlefield.

Defensive Command takes place in the wide, shallow crater that would later become Eagle's Nest One.[1] Before the base's construction the site was used for command training.[2]

Corbett begins by introducing Bates to the T7 Badger, commenting that it's an excellent defensive weapon but cannot use its weapons while moving. He instructs Bates to lead it out of the crater it is currently in to the target range and deploy it, guiding him through using the Command Interface along the way. Once the turret deploys at the range, Corbett sends it a target drone to destroy.

Defensive Command was originally built as the second half of Combat Driving. The Combat Exercises were later split into several missions and arranged into a seperate campaign, prompting the creation of a new map and script.

An unused audio file suggests that, at some point, the separated version of the mission was to demonstrate selecting units with the spacebar.[3]

Corbett's instructions are a little longer than necessary, and you'll find your hand being held all the way through the mission if you keep waiting for him. If this is your first time playing that's fine, but if you've played Battlezone before you'd be better off doing things before he asks you to.

Select your turret and move it out to the target range. It doesn't matter if you give it a deploy order now or not, because you'll have to do it when Corbett asks you either way. Once the turret is deployed a target drone - actually a re-purposed Tug - will head towards it. You can sit back and watch or help your turret destroy it. For quickest completion, you can attack the drone yourself the moment the mission starts.

You can only fail this mission by trying to commandeer your turret yourself or destroying it. 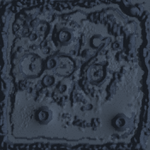 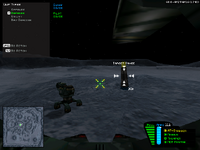 The target range, future site of Eagle's Nest One 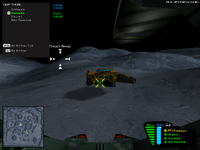 The useless drone to the south-east of the target range. 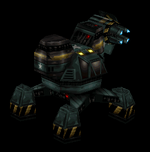 The T7 Badger, your best friend for this mission.
Add a photo to this gallery

Retrieved from "https://battlezone.fandom.com/wiki/Defensive_Command?oldid=17120"
Community content is available under CC-BY-SA unless otherwise noted.