Welcome to the moon, Commander. I'm going to walk you through combat training. The General wants all NSDF command posts prepared to defend themselves; the future of our country depends on our success here in space.
- Lt. Corbett

Combat Driving is the first of the Combat Exercises - a campaign in Battlezone and Battlezone: Rise of the Black Dogs. It has Jason Bates drive a Razor around an obstacle course in order to acquaint himself with its controls.

Combat Driving takes place in a heavily cratered area of Luna near a large disused biometal quarry which has been re-purposed as an obstacle course intended to teach pilots the basics of commanding their vehicles.[1] A test range to the course's immediate east allows pilots to develop their skills in combat using two Training Turrets. Pilots who pass basic combat driving tests can graduate to basic command training if their rank allows.[2]

Corbett welcomes Bates to the moon and introduces him to the Razor. He says that, since General Collins wants his forces able to defend themselves, the Commander is to be run through combat training.

Bates successfully guides the Razor through a slalom course set out before him across a set of craters, at which point Corbett has him drive over the lip of a disused biometal quarry to the north, using the vehicle's Jump Thrusters to ease the landing. Once there, Bates is left with no choice but to use the jump thrusters again to make his way out by jumping between ledges along the northern quarry walls.

After finding his way out of the quarry, Bates is instructed to head to the target range to the west. Bates briefs him on the Razor's combat mechanisms before pointing him to a Training Turret deployed in a crater. Once Bates has destroyed it he has him do the same to another just south of it before declaring that he has passed basic combat training and can move on to learning to command units.

Before the other Combat Exercises were created Combat Driving was to be the first mission of Stars and Stripes, incorporating the contents of Defensive Command and teaching the player how to control units.[3] From there, the skills now taught by the later training missions would be given during the early version of Red Arrival before being interrupted by soviet attack.

As soon as you load you'll want to get into the Razor that awaits you. This is the only vehicle in the map you can use, and you'll have serious trouble completing the obstacle course without it.

Before you are two rows of Pylons set out to guide you along a slalom course set into the craters. Take care when travelling through them; Corbett will only warn you about being out of bounds four times before you fail the mission and have to start over.

After getting through the slalom Corbett will ask you to drive over the rim of the crater before you. He suggests using your jump thrusters at the end of the fall, but you can hit them at any time to slow your descent.

Now you're down there you need to get back out. The only way to do this is by hopping between the ledges that run anticlockwise around the crater from your right; the jumps start easy and get progressively harder, but they can all be done straight on with enough forward (and upward) momentum. You could also fire your thrusters off against the wall to the right and nose down in order to get around a little more easily.

Once you have left the crater Corbett will mark the first of two training turrets on your HUD. You can destroy them in either order, but the one marked is closest. Ammo Pods are provided by each turret in case you manage to run out of ammunition before you can take both down. It's a good idea to practise strafing to avoid their fire here as that skill will come in handy later, though you don't really need to as their Paintball cannon won't do any damage. Destroying both drones will complete the mission. 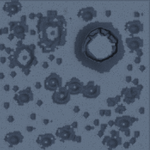 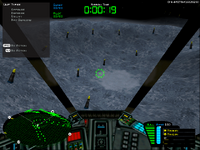 Part of the opening slalom area 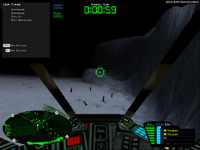 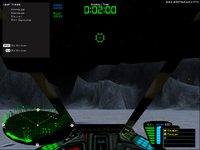 The route out of the abandoned quarry 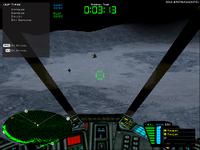 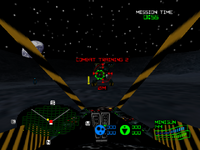 Combat Exercises in Battlezone: Rise of the Black Dogs 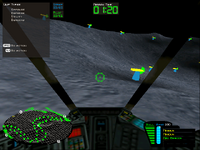 The primitive pylons used on Combat Driving in the Battlezone Demo 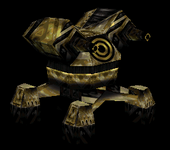 Retrieved from "https://battlezone.fandom.com/wiki/Combat_Driving?oldid=17112"
Community content is available under CC-BY-SA unless otherwise noted.