Capture the Flag is a map removed from Battlezone after the Multiplayer Balancing Test that was designed as a Strategy Capture the Flag map. It can be found as a playable map in the 0.8 beta, though functionally it is no different from any other Strategy maps. A repackaged version for Battlezone 98 Redux was included as part of the Lost Maps collection.

Capture the Flag is based on The Race Is On from the Stars and Stripes campaign, though there is no harmful lava on this map. The initial base sites can be found at the north-west corner and half-way along the map's eastern side, but the primary point of strategic interest is the Storage Crate in the center. This crate is inert; while the players were intended to fight over control of it by tugging it back to their base nothing will change if it is destroyed, recycled or moved by either player.

Considering the two-player maximum there are a lot of Geysers on this map; this will help you to keep your base away from your enemy while you expand and the abundance of Biometal will allow you to do so quickly. If you are playing the map as it was intended then it is wise to begin defending the Storage Crate in the center of the map as quickly as possible, as your opponent is likely already trying to do so - otherwise play is largely the same as any Strategy map. It is important to note that there is no damaging lava anywhere on the map, so vehicles are free to roam across the level. 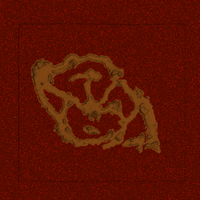 Retrieved from "https://battlezone.fandom.com/wiki/Capture_the_Flag_(STCTF_map)?oldid=17164"
Community content is available under CC-BY-SA unless otherwise noted.