Capture the Flag, originally known by its technical name multg1, is an unused multiplayer map cut from Battlezone. Its files remain in the game's ZFS files to this day.[2]

Contrary to the implication of its unofficial name, multg1 is not a Capture the Flag map; it was designed as an Attack and Defend map and was removed when the gamemode was deemed broken. Despite Attack and Defend having been repaired by the 1.5 Patch, the map has never been added to the map list.

The two teams of players spawn on the north and south sides of the central mesa, with one set of Supply Crates in a crater to their right and another surrounded by ridges to the left. The natural defense afforded to the left ridge means players will often focus more on the rightmost one, leaving it more open to attack.

Mapmaker Iouri Lechtchev repackaged the map under the name Capture the Flag and released it in playable form. It was later repackaged again for Battlezone 98 Redux as part of the Lost Maps collection.

This map is best played with four or more players - any fewer and it is too difficult for players to find their opponents before they have destroyed their Supply Crates. With four (two teams of two) players it may be that it is best to split duties situationally, only attacking when certain of the enemy positions or attacking both points at once in order to draw the enemy's attention away from your crates.

With more than four players, each team can assign one member to defend each crate. This makes it much easier for teams to keep track of what is happening at each objective, reducing the possibility of stealth attacks if defending players remain alert.

It is important to note that whilst the crates surrounded by ridges at the north-east and south-west corners are afforded a significant degree of natural protection that they are not impenetrable; while players are unable to drive around to the rear entrance due before hitting the map boundary, those in lighter hovercraft or walkers can still climb the sides and attack undetected if the defending player is only monitoring the more accessible entrance. 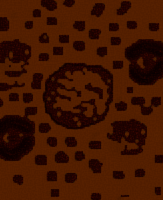 Retrieved from "https://battlezone.fandom.com/wiki/Capture_the_Flag_(Attack_and_Defend_map)?oldid=17168"
Community content is available under CC-BY-SA unless otherwise noted.