The super-heavy tank is the largest vehicle in the Black Dog arsenal. Its massive size allows it to wield a more substantial armament than any other unit, and it boasts at least four cannon hardpoints and thick, heavy EDD armor. 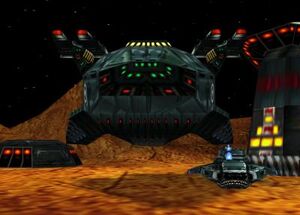 The Black Dog super heavy tank is similar in size to the Mammoth, but has a sleeker shape and a slightly wider profile. Its cannons are mounted on small stems at the top of the vehicle and are much more widely spaced, which produces the same issue present in the Sasquatch; hitting a target with all four cannons is difficult, and the gap between the cannons is more than large enough for a Czar or Tusker to safely position itself between their firing lines.

Presumably the tank would have similar armament to the CCA version, using each cannon for two separate weapons.

The tank never made an appearance in Battlezone: Rise of the Black Dogs and was not present on the game cartridge, despite having been fully designed and implemented at some point during development. The reasons behind its removal are unclear, but may be a result of the number of weapons; units in Battlezone cannot carry more than five. Due to the somewhat clumsy, inelegant nature of Rise of the Black Dogs' programming it may have been that the tank had so many that attempting to pick up a weapon crate caused a crash; the CCA Mammoth (which has nine weapon slots) appears in a situation where its weapons cannot be changed by any means.

If this is the case then there may simply never have been time to create a mission where the Black Dog super heavy tank could appear. It is possible that it was originally intended to have been usable in the final mission of the Black Dog campaign, which would explain the absence of the Mobile Unit Factory.

Retrieved from "https://battlezone.fandom.com/wiki/Black_Dog_Super_Heavy_Tank?oldid=16792"
Community content is available under CC-BY-SA unless otherwise noted.