The map on which the demo mission is set is derived from the earlier map Profile01, which would also later produce the ISDF Campaign's Mire missions Through the Looking Glass, Get Help and Rumble in the Jungle.

As the ISDF invasion of Mire progresses, the dropships Valiant and Lionheart are en-route to a drop-off site when they detect a number of unidentified targets on the ground below. The Valiant is ordered to pull off while the Lionheart continues onward, but the latter is shot down by the Scion forces and crash-lands nearby. The Valiant is immediately diverted to search-and-rescue; its Jackal squad is to clear the way for a rescue APC, while a Sabre provides close escort.

Once the squad reach the dropship, it becomes clear that the situation is worse than expected, as a pack of carnivorous wildlife is roaming outside. One of the soldiers who had dared venture outside the crashed dropship is eaten by a Jak before the squad can intervene, and the Sabre pilot is ordered to kill the rest of the pack before the evacuation can proceed. Once the surviving pilots are loaded aboard the APC, the Sabre pilot scuttles the dropship using a Satchel Charge and proceeds to escort the APC past a Scion Gun Spire to the Valiant, which has moved to a dust-off site at the other end of the canyon. 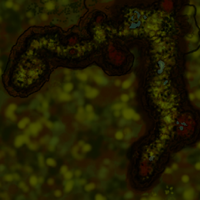 Retrieved from "https://battlezone.fandom.com/wiki/Battlezone_II_Demo_(Mission)?oldid=16651"
Community content is available under CC-BY-SA unless otherwise noted.