In terms of content the iOS and PC versions of the game are effectively identical, but the iOS version makes a few small changes to improve playability on the system. Most of these, such as the on-screen joysticks, command menu visibility toggle and unit group interface, are primarily cosmetic changes to make the game more touch-friendly; the iOS version also features aim assist and an auto-fire feature that automatically fires the selected weapon when an enemy unit is under the crosshairs. These two features mean the iOS version's multiplayer is not compatible with the PC or Mac releases. The iOS version also retails for just over half the price of the PC and Mac releases ($9.99/£9.99/€10.99 compared to $18.99/£18.99/€20.99). 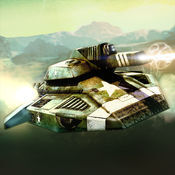 App Store background
Add a photo to this gallery

Retrieved from "https://battlezone.fandom.com/wiki/Battlezone_98_Redux:_Odyssey_Edition?oldid=16269"
Community content is available under CC-BY-SA unless otherwise noted.