Battlezone 2000 is a game for the BBC Micro and Acorn Electron by MC Lothlorien. It is not created under license from Atari, or indeed even associated with their later and more famous Battlezone, but is notable for several similarities in name and gameplay. It is based on the 1977 board game Ogre and its sequel G.E.V..

Units in Battlezone 2000 are represented by small icons and each have four stats applied to them; attack (A), defence (D), weapons range (R) and movement range (M). The player can choose their force makeup to an extent by selecting the number of G.E.V.s, heavy tanks, and missile tanks fielded; the total number of these units cannot exceed nine and they must take a minimum of one of each.

^* : As a particularly fast-moving unit, the G.E.V. is allowed to move twice per turn.

The Ogre has four different weapons, each with a different set of statistics. Its movement speed is calculated as one fifth of the tread units it has remaining.

Aside from the Ogre, which starts at H21, the board is also littered with craters (

), which occupy seventeen terrain squares and render them impassable. The manual mistakenly lists these alongside the player's units. Craters occupy the following tiles:

After the player has selected their difficulty, their forces are laid out as follows. If the default force makeup is overridden, the spaces for the three types of tanks (G.E.V., Heavy Tank and Missile Tank) are filled from left-to-right and top-to-bottom.

Once the forces are placed on the board, the player is asked whether they wish to let the computer take the first turn. After they input an answer, play begins.

Atari were working on their own port of Battlezone for the BBC Micro, but it was never released. This may be due to the release of Battle Tank by Superior Software in 1984.[1] 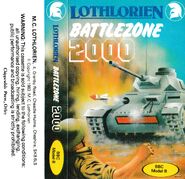 Play begins
Add a photo to this gallery

Retrieved from "https://battlezone.fandom.com/wiki/Battlezone_2000_(BBC_Micro)?oldid=16829"
Community content is available under CC-BY-SA unless otherwise noted.